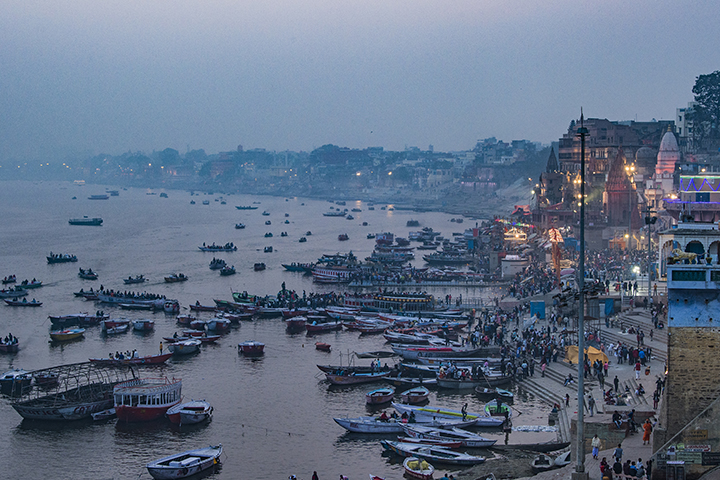 Benares, Kashi or Varanasi – whatever you may use to refer to this holy city, it is beyond all what you have read and heard about it. Words aren’t enough to describe the vibe in this city and only being there on the holy ghats will make you realise what I mean. No wonder Mark Twain described the oldest inhabited city in the words as: “Varanasi is older than history, older than tradition, even older than legend and looks twice as old as all of them put together. Om Namah Shivayah! 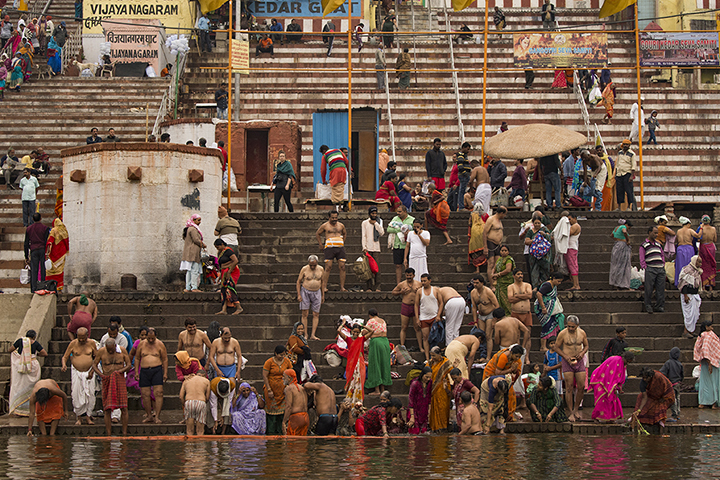 The Ghats of Benares on the Western Bank of the holy Ganges runs from Varuna Ghat in the North to the Assi Ghat in the South covering a distance of 6.8 km in the shape of a half crescent moon. The walk across the 84 ghats is a must for any traveller. The rich culture, tradition and beliefs you experience along the river is next to none. There is probably no place in the world where there is such a large concentration of people with one belief – the belief that taking a dip in the Ganges washes away all the sins. Every morning, tens of hundreds if not thousands of pilgrims arrive on the ghats and as the sun rises, they offer prayers to the sun as they descend down to the river. Some people take a dip and walk out, some perform rituals while in water, some swimming, some washing clothes and a few people amongst the crowds are people like me with a camera trying to capture and document the moment. 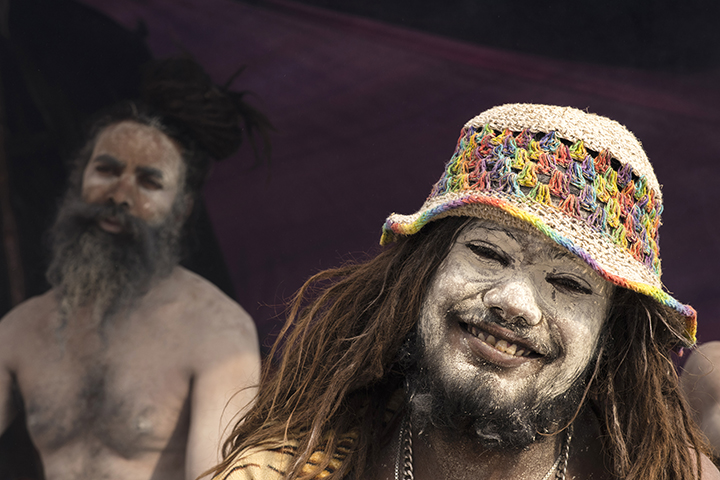 It was in 2017, when I first landed up in Varanasi. Between being in Gir Sanctuary in Gujarat and visiting friends in Delhi, I had 5 days to kill and coming back home to Coimbatore was my last choice. I had to decide soon to book flights and among the many destinations to go to, the cheapest option from Rajkot was to get to Varanasi via Mumbai and then onward to Delhi. Was a bit sceptical, but decided to see what was in store ahead in the holy city. I booked flights, hotels, airport transfers etc. and then told at home that I planned to go. They thought that I was initially kidding, but when I showed my tickets my parents were a bit stunned. They probably thought something had gone wrong with me. The reason being until then, I never bothered to photograph people or cities or culture of any sort and would somehow dodge going to temples when my mother asked me to come.

The day finally came, I overslept in the airport hotel in Mumbai and barely made it to the 6:00 am flight out. Landed and an hour later was in Varanasi City. Over the next 4 days, I walked the ghats twice a day, visited the Jyothirlingam shrine of Kashi Vishwanath and a few other places. Oh, not to forget, the ruins Sarnath as well where Lord Buddha had delivered his first sermon. The milk sweets and the chai in this city is something to die for. The Royal residence of the Maharaja of Benares in Ramnagar is unfortunately in family dispute and their flamboyant collection of imported cars, wildlife trophies, fancy attire, arms and other possessions are in the museum but in delapidated condition. At the end of the trip, there was something about that city which created a sense of feeling to go back. But then, I had my own doubts if I would ever return and flew down to Delhi for the rest of the trip. In less than 3 months, I was back in the Mumbai Airport on transit heading to Varanasi.

The City’s ghats are teeming with activities everyday in the year from dawn to dusk. The Harishchandra and Manikarnika Ghats are the cremation ghats. No where in the world are cremations done at night except at the Manikarnika Ghat. It is believed that since the city was built by Lord Shiva himself, the deceased would attain salvation even if they were cremated after sunset and before sunrise. To pass away in Varanasi is considered to be a blessing and many sick and old make their way to the city and live their last days here. In the pre colonial era where multiple kingdoms ruled India, many royal families constructed their private ghat, one of the notable ghats being the Brijrama Ghat by the Royal family of Bihar. The complex has India’s oldest elevator and is now one of the finest 5* hotels in the area. 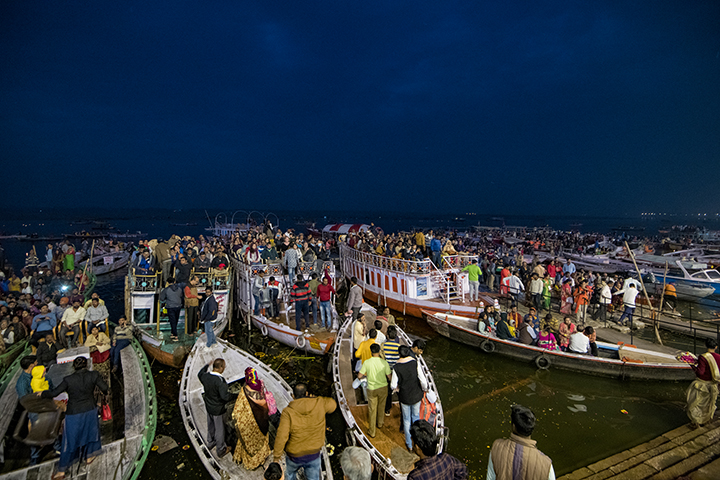 As the sun goes down, scores of tourists arrive on boats at the Dasashwamedh Ghat to witness the Ganga Aarti Ceremony. It is a ceremony performed by 7 priests singing devotional songs and hymns in reverence and expressing their gratitude and thanks to the Holy Ganges. More than being on a boat, the best places to see the Aarti are from behind the priests and not from the river side also. 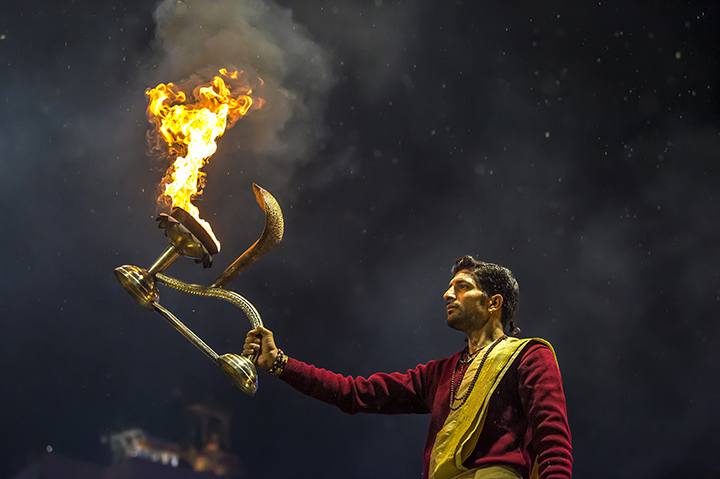 The ceremony lasting about an hour is boost to positive energy. The first time I was there, my guide planned to take me there just one evening. The other days, he would drop me back at the hotel. But I was standing every evening at the Dasashwamedh Ghat to see the Aarti. Music concerts are nice in their own way, and these ceremonies have a unique charm. Hara Hara Mahadeva!

There is a common misconception among people that these people such as the man in the picture above are Agoris. Yes, of course there are Agoris in Varanasi. But they don’t come out on the Ghats during the day time. The person in the picture is a Naga Baba. They are staunch followers of Lord Shiva and live a basic life and have given up worldly pleasures. The believe that ash is enough to cover their body and that is their clothes. I was in Varanasi again last February (2019) during the Ardh Kumbh which happens at the Triveni Sangam in Allahabad. The Ghats were filled with more people than I have ever seen before.

Kashi, Benares, Varanasi – whatever you may use to refer to this holy city, it is beyond all what you have read and heard about it. Words aren’t enough to describe the vibe in this city and only being there on the holy ghats will make you realise what I mean. Home to one of the oldest educational institutions for Sanskrit and Vedic learning, Varanasi is also referred to as the city of ‘Learning and Burning’. No wonder Mark Twain described the oldest inhabited city in the world as: “Varanasi is older than history, older than tradition, even older than legend and looks twice as old as all of them put together.