After a busy year of high school, I travelled for the first time to this park. Though it was a short stay at Corbett, the photo opportunities were very good. Large herds of elephants, deer, birds and not to forget, 2 tigers are worth mentioning. On April 5, 2016, I flew down to Delhi from Coimbatore and drove for 5 hours to Corbett. I was put up at Infinity Resorts. A very good place to stay before you enter Dhikala the next day. Next morning, with packed breakfast we drove towards the Dhangari Gate, got our IDs and bookings checked, and entered at around 6:45 am. The jungle was silent throughout. Stopped at High Bank for breakfast and got to Dhikala at around 10:00 am. Drove into the grasslands and came across a herd of elephants. 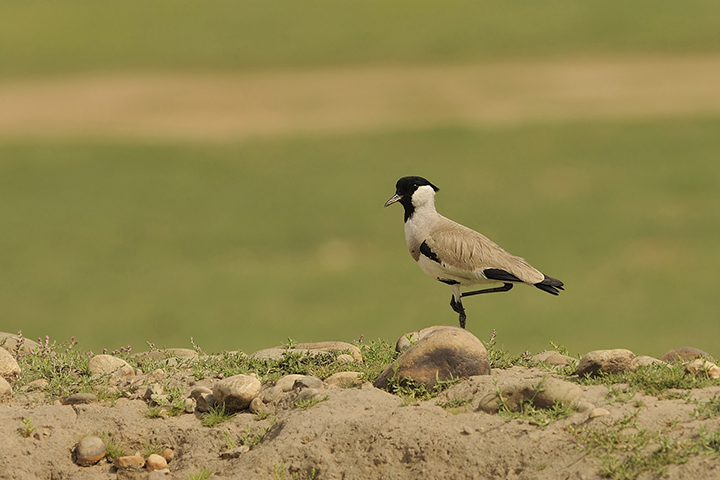 The River Lapwings are found all over the park. But some of them seem to be a little shy with a gypsy around. But this individual wasn’t so skittish. 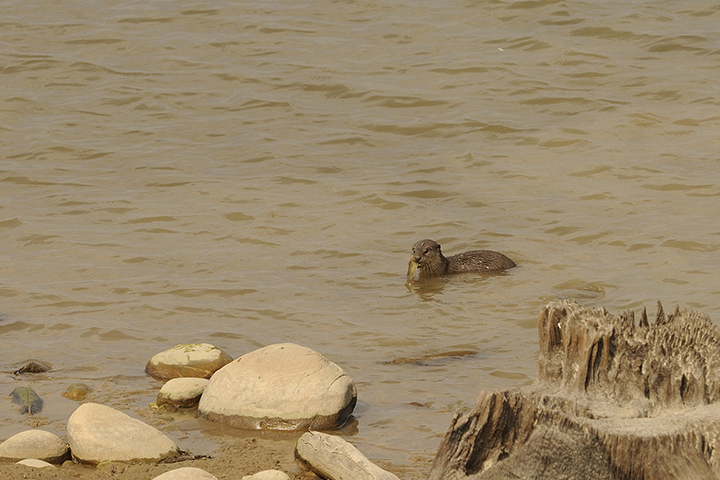 The otters were too far even for my 600mm lens. They were at a lower level too. The otter in the image caught a fish and moved towards shallow waters to feed on it. This was the only opportunity I had throughout.

We returned to the Dhikala Campus and checked-in to our rooms. The entire campus is perched on the banks of the Ramganga Reservoir. It is a fantastic location to stay. But if you are looking for comforts, this definitely is not the place for you. The reason being, the rooms are not too well maintained and electricity shutdown could make it quite difficult to sleep at night. Post lunch, we drove on Sambar Road and a herd of elephants had just crossed the Ramganga on to the other side.  I suppose we were 5 odd minutes late to get there. 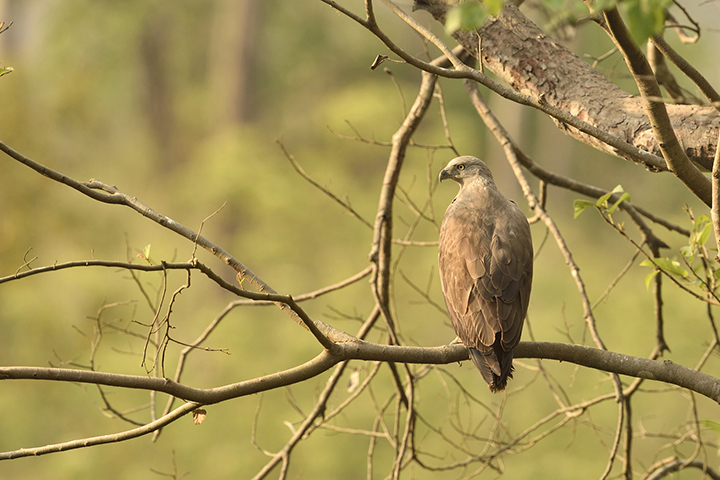 On the way towards the Paar area, came across this Fish Eagle just off the road. The rest of the evening was quiet with not much of sightings anywhere. The next morning, a tiger was seen sitting amidst the tall grass opposite the Dhikala Campus gate. I did see a spot but not sure if that was the tiger. Lost sight of it shortly. Drove further down on the Sambar Road and after about an hour there was just one alarm call of a langur.

What we saw soon after that was this young tigress walking head on on the road. She came a considerable distance on the road and walked into the bushes on the left side of the photo.

A herd of about 20 elephants were at the bank to cross over towards the forest on Sambar Road. With the rising sun in the background, it was a surreal setting.

The elephants mud bathe after they cross. They kick up a lot of dust and the sun in the background adds to it. The river crossing and the mud baths seem to be a routine which happens on most summer mornings. 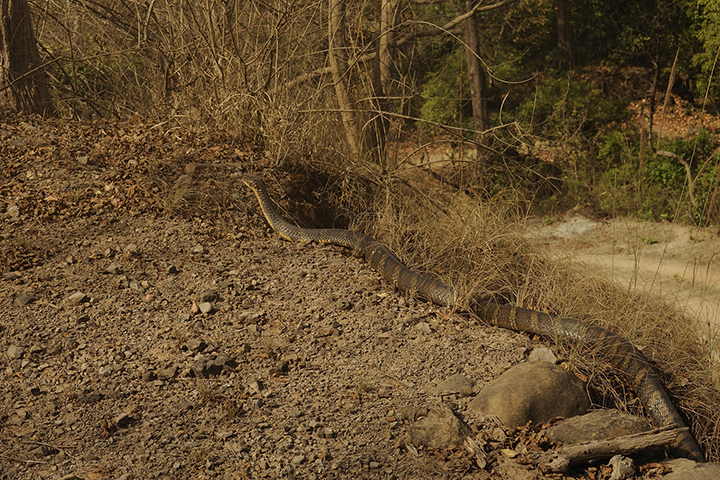 Since the light was harsh in the grassland, we drove towards the Kanda Guest House. Of course you can’t reach the guest house on the road from Dhikala.  On the way back to Dhikala, I saw something long and a bit shiny on the road side. It was a King Cobra! The moment we stopped, he just moved down the slope and thats it. Never could we see it after that.

The afternoon safari began with this herd of elephants on an island in the Ramganga. They fed around and later moved towards the grasslands on the left.

As the sun sets, herds of elephants as the one above make their way back towards the grasslands after a drink in Ramganga Reservoir. It is a sight to watch these giants walk in groups across the open grasslands.

After spending some time in Paar area, we drove back just in time to end our safari at the Dhikala Campus. Made this image from the temporary river across the reservoir in the Paar area. 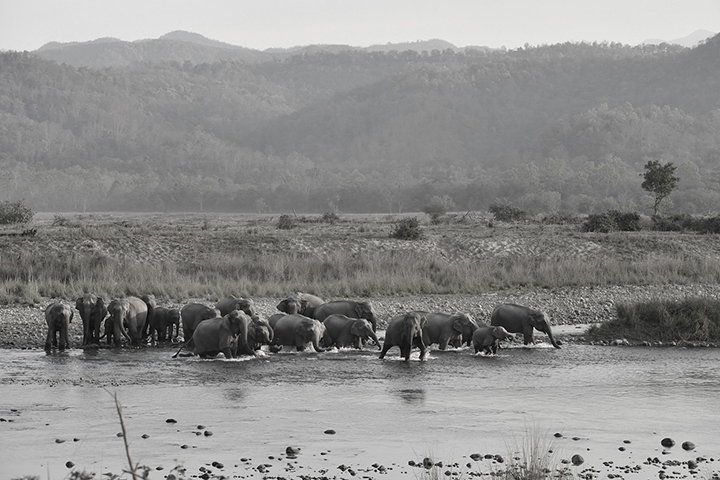 Early next morning, I got to Sambar Road hoping to catch the elephants cross the river. I stood in my gypsy shooting while another photographer friend from another vehicle parked behind me called out to me and pointed out ahead of me.

It was a tigress which slunk out of the bushes. She was the famous Paarwali Tigress. Paarwali paused for a moment looking at the hesitant elephants (Hesitant because of the tiger’s presence) and then went back into the bushes.

She came out again onto Sambar Road, scent marked her territory and walked passed the vehicles towards the Ramganga Reservoir. Just then a herd of deer crossed the reservoir. She began stalking them. It was that she was hunting. Moments later, Paarwali walked up the ravines. It was quite a distance from where we were. Considering that she just got into cover, I thought that she would take time before an attack on the deer. So I decided to put on a teleconverter. During those few seconds, she charged and hunted a deer across the reservoir. Due to the distance at which we were, I didn’t realise that she caught a deer. A few moments later there was a commotion and my guide and driver pointed out and said that she had a deer in her mouth.

For a moment, I was quite shocked and awe-struck to see this sight through the viewfinder of the camera. I definitely regret missing the chase. But since I put on the teleconverter, I was in perfect range to get her dragging the carcass across reservoir. Never saw her after that.

One of the few bulls I saw during my stay in Corbett. He crossed the reservoir soon after the tiger moved and made his way towards the jeep track and across to the Saal Forests on Sambar Road. 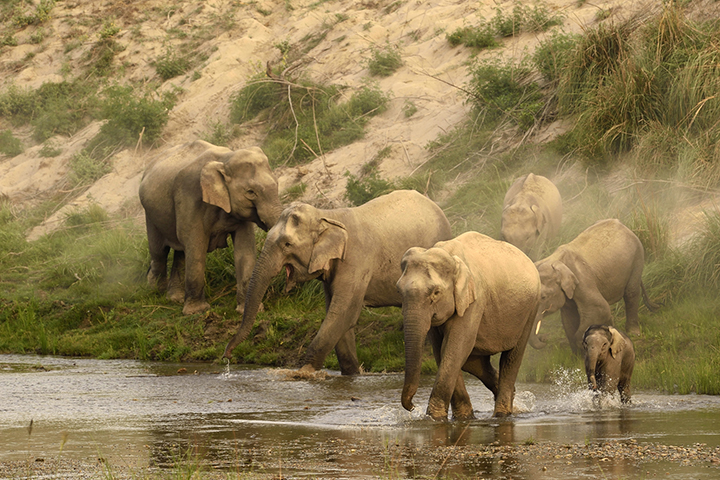 Another herd arrived at the edge of the reservoir to cross. Two youngsters seemed to be having a gala in the water edge. They chased each other pulling their tails.

This is the Dhikala Grasslands and the iconic dry trees. 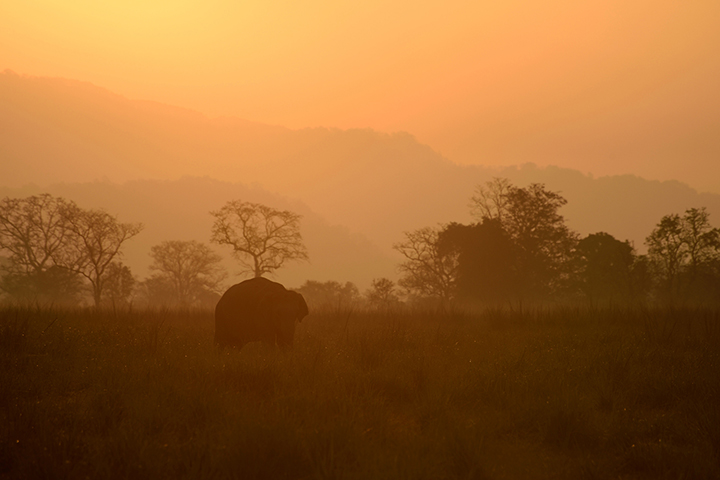 A few more elephants from the Dhikala Grasslands. 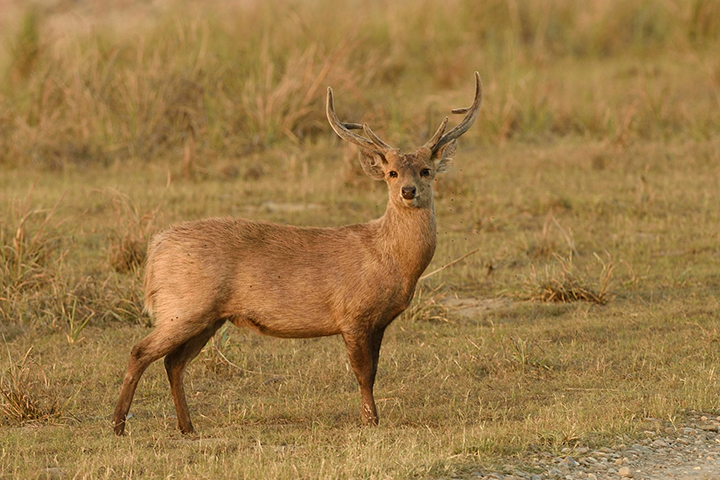 On the last evening, I finally got to photograph the Hog Deer as he came out of the grassland to cross the road.

It was time to leave Dhikala. After breakfast, we drove out and on the way, came across this Himalayan or Crested Kingfisher. Stayed the night at Infinity Resorts before heading to Sattal the next day.