It was April 2016, my maiden visit to Jim Corbett National Park in Northern India.Known to be one of the greatest abodes of Indian elephants, this park on the Himalayan Foothills is indeed a Tiger Haven too. It was my first morning on safari in the Park. Leaving the Dhikala FRH at crack of dawn, we drove along the Ramganga River waiting for the Elephants to cross over into the forests. A faint alarm from behind led me to a young tigress, very shy and the moment she saw my Gypsy, she was gone in no time.

Soon after the Tiger moved off the road, the Elephants began crossing the Ramganga River and kicked up a lot of dust. The golden light and the rising dust created a surreal scene. The herds crossed over and I stood in awe watching the sunrise. 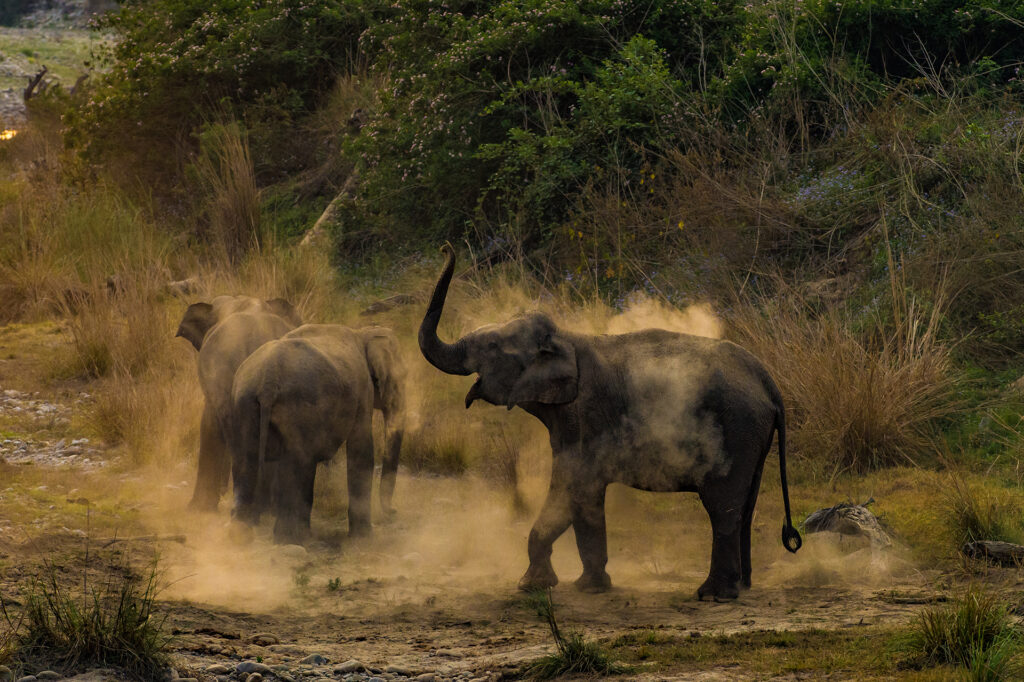 A few minutes later, strong alarm calls caught everyone’s attention. By the way, it was only my Gypsy at the sighting of the Tiger in the morning and hearing the calls, I thought it was the same Tiger moving. Having seen how skittish she was in the morning I had less hopes to see her again. The calls moved closer and closer, and the excitement was over the top. A gypsy parked a few tens of meters ahead spotted the Big cat around the corner and they waived out to us.

It wasn’t the same Tigress from the morning, but the famous Tiger of Dhikala, The Paarwaali Tigress. Elegant as she was, the beautiful cat stealthily moved on the road marking her territory and she was stalking a herd of deer by the road side. She broke cover to soon and the herd scattered with a cacophony of alarm calls from Spotted Deer and Sambar. And then, the unexpected happened.

Paarwaali slunk into the bushes and disappeared. Moments later, she was seen down in the ravines approaching Spotted Deer in the Ramganga River. She sat in the grass and my driver decided to approach closer. I made an impulsive decision to add a teleconverter to my 600mm lens – probably the worst decision I made and regret even today. While my body was off the lens in the moving Gypsy, she charged into the water.

This image was shot by my father V.Ramnarayanan. The chase was done in 3-4 seconds. And Paarwaali was successful – she hunted a Deer and sat in the River with the Deer in her mouth. Tigers in general have a success rate of about 5% which means that in every 20 attempts to hunts, they make one kill. Being a Tiger is no easy life.

Corbett National Park is definitely a paradise. I consider myself so lucky to have witnessed such an incredible natural history moment in Corbett, a place that has been the backdrop for many tales from various authors, the likes of Jim Corbett, after whom the park is named. It was the last moments of the Deer in the grips of death. While I thought the action was over, there was more waiting to unfold.

As she got up and dragged the carcass away, it seemed that the action was over. But she paused and glared back at all the gypsys parked on the other side of the river, one last time. I moved closer, and having the advantage of the teleconverter on my 600mm lens, I was in an ideal range for the finale of the great sighting, which I call, ‘The Ramganga Tale’.